Students are test-driving new Common Core exams. You can too

Students are test-driving new Common Core exams. You can too

By Sarah GarlandMillions of American students this spring are piloting new online standardized tests linked to the Common Core State Standards, which will debut next year in states that have adopted the standards. The main reason for the trial run is to see if computer systems are ready to handle millions of students logging on to take the exams at the same time.

But it’s also a public relations test. Students are getting a first look at the exams in full, and educators will now have a better sense of whether they will live up to their promise. 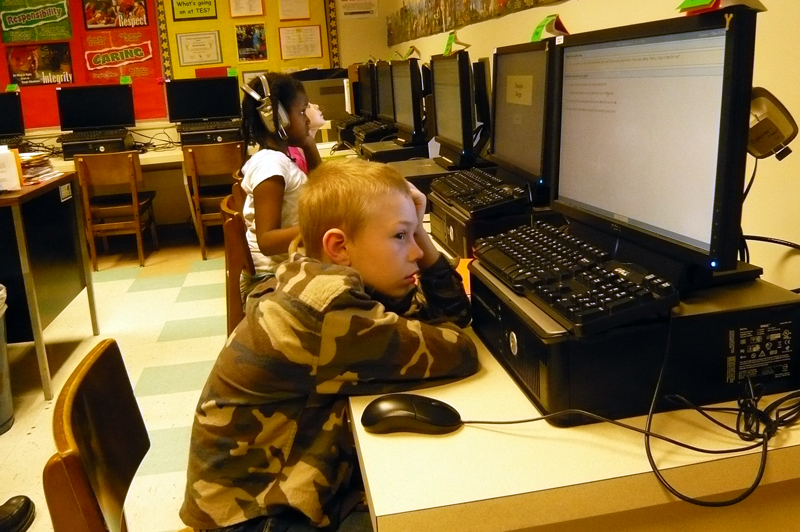 A student at Townsend Elementary in the Appoquinimink school district in Delaware taking a computer-based test. (Photo by Sarah Garland)

That promise is to move beyond multiple-choice questions to better, more thoughtful exams that promote critical thinking and problem solving – also the mission of the Common Core standards.

“It’s about changing the way we do testing in this country,” a recent release from PARCC, one of the test designers, said. “PARCC states are creating tests worth taking, made up of texts worth reading and problems worth solving.”

(The two primary designers of the tests, known as PARCC and Smarter Balanced, are a pair of organizations made up of multiple states that adopted Common Core.)

The new tests are intended for computers, which has expanded the kinds of questions they can ask. Multiple-choice questions won’t completely disappear, but they’ll be accompanied by more complicated formats that allow for more challenging work. For instance, one sample Smarter Balanced question asks students to select three sentences from a passage that demonstrate the narrator is worried.

The field testing began March 24, and so far schools are encountering the expected technological glitches, and dealing with them.

As for the content, the verdict is still out on whether these new Common Core-aligned tests are significantly better than paper-and-pencil state ones they’re replacing. The first item on PARCC’s fourth grade math practice test, for instance, is a multiple-choice question. But the second one is a subtraction problem which asks students to solve 904 – 256, and doesn’t have options for students to choose from. They must fill in the blank.

Here’s a report from an NPR editor who took one of the eighth-grade exams and thought it lived up to the hype. And another from the CEO of PARCC, Laura Slover, who visited a sixth-grade classroom in Maryland, where students told her she had “done a ‘good job’ developing the test.”

You can try out sample tests that the test makers released to the public online and see for yourself if they boost your critical thinking skills. Here is a link to practice tests from PARCC, and from Smarter Balanced. Both groups also released individual sample problems previously.

This entry was posted in Hot Topics. Bookmark the permalink. Post a comment or leave a trackback: Trackback URL.